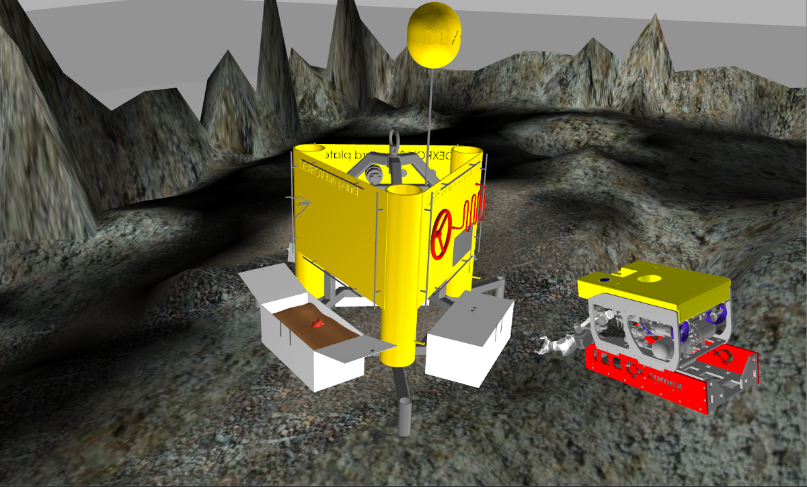 Testing new hardware and software systems is a high-stake activity. This is doubly true for systems at sea. If you test a robot at a depth of 1000 metres and it fails, you might lose it forever or damage it. The DexROV project has spent months enhancing its simulation environment – to safely test DexROV without the risk.

The DexROV simulator has integrated a mock-up of the final DexROV robot into a virtual reality environment using technology that is also implemented in video games. This building block technology creates a realistic world for simulation. You can watch a video demonstrating this below.

The DexROV mock-up, or the ‘virtual DexROV’, is based on the actual specifications of the prototype using accurate build data. It interacts with its environment using virtual on-board sensors that perceive the virtual world around it.

The DexROV simulator creates an environment using voxels. A voxel is a building block that specifies the size and type of something in a virtual environment.

The environment was modelled by the Jacobs team using real information that was collected underwater.

The DexROV consortium has consistently shared their hardware and software developments so that they could be programmed into the environment, which also includes the test-bed created by Comex for the tests at sea.

‘Virtual DexROV’ perceives and reacts to the simulation environment the way the actual prototype will operate underwater. This ensures that movements and parameters can be adjusted over time to find the best configurations for internal motors and autonomous behaviours.

Driving virtual DexROV
To ensure that DexROV will respond to the commands given by the operator in the ways it should, the effect of the thrusters and the nature of the water around DexROV have been included in the simulator. The consortium can test the speed and nature of virtual DexROV’s response to input from ROV pilots, including novel haptic commands.

Simulation for development
All partners need access to DexROV but there are limited prototypes in production; however, the simulator makes it possible for everyone to test their own deliverables. Individual parts, components or behaviours can be substituted or replaced to validate new software developments. This ensures that all partners can continue to make progress in parallel.

Modern physics simulation engines are capable of showing exactly how DexROV would perform in different scenarios under water. Suitable accuracy for behaviours and environment is achieved by using Gazebo 7.0 as a physics simulation with multiple custom-made plugins. Our virtual environment must account for light conditions, data delays (latency), limits to processing power or the effect of currents to make sure that all DexROV’s components function, even in the most challenging undersea conditions.

Simulated scenarios, real success and safety for our investment
Using a dedicated simulation environment reduces the risk to the DexROV prototype while critical elements are developed and integrated. For this reason, components that our consortium partners produce are only integrated into the DexROV robot prototype system when they pass strict tests in simulation. Real-life validation of DexROV will continue this summer in the Mediterranean Sea, when we take DexROV live for wet trials at sea.

For more information, please contact info@dexrov.eu or watch the video below.