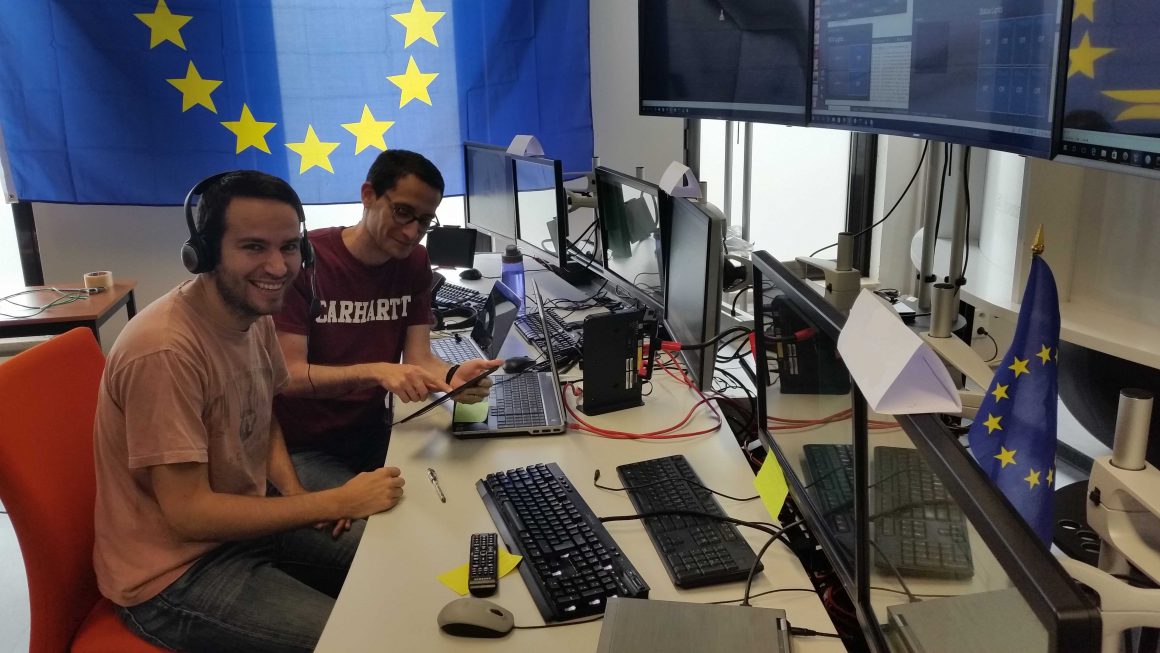 On 13-17 June, the DexROV consortium conducted the first testing and integration trial for DexROV. Each partner’s elements were assembled on the DexROV framework and the software systems were configured using a satellite connection between the onshore control centre in Zaventem, Brussels, and aboard the Janus II in Marseille, France.

SPACEAPPS and COMEX took the lead for the dry trials, as they hosted the two sides of the trial. The COMEX team in Marseille used the Janus II in the Marseille harbour to host the ROV side of the transmissions. SPACEAPPS on the other side managed the control and management centre.

The first two days were spent establishing the satellite communication link. This involved installing the Omniaccess satellite dish in a temporary configuration aboard the Janus II vessel. The dish electronics and software components then had to be configured before testing with a simulated ROV could begin.

The following three days were used to test the software interfaces that had been prepared by each partner, ensuring system compatibility and functionality. The interfaces of the machine learning module from IDIAP, the navigation control software from ISME, and the vision based localization and modelling software from JACOBS were combined and tested together for the first time.

Tests were conducted to ensure that the control centre acquired essential information from both the simulated ROV and the Janus II, such as GPS location data and heading and sonar data. An ROV simulator was developed in advance by JACOBS to complement the physical ROV that was used during the testing and integration process.

At the onshore control centre in Zaventem, IDIAP and SPACEAPPS worked together to deploy the major software components for the control centre. IDIAP’s software will convert the human movement into a mechanical representation that can learn as it executes commands.

The trials ended on Friday with a set of command tests. Commands were sent from the control centre in Zaventem, over the satellite link, and the Marseille side confirmed their successful execution. Testing successfully turned on the lighting system, initiated the propellers, and manipulated the ROV camera. These tests were conducted while the ROV sent video to Zaventem in near real side, with a latency of ~600ms.

Consortium partners will now refine their findings and start to prepare for the wet trials in 2017 in which DexROV will be deployed to a depth of 100 meters. This is an excellent start for the team.