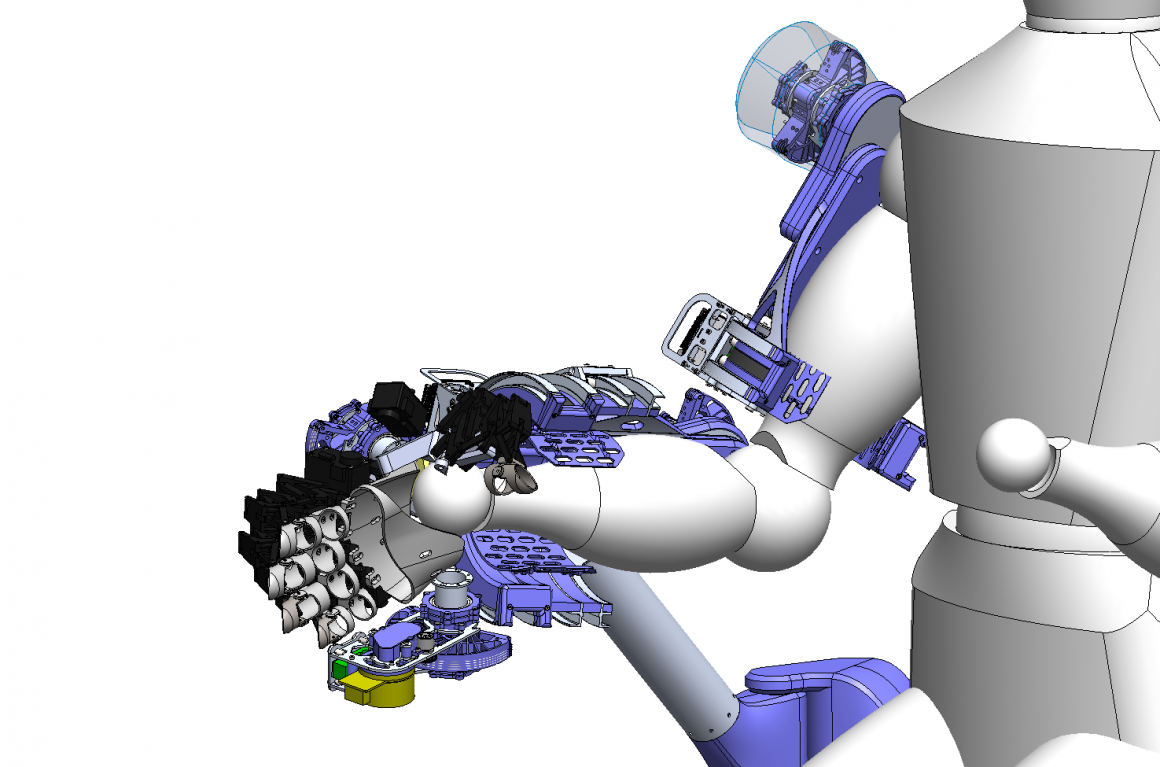 One of the goals of the DexROV project is to integrate fine, dexterous control of an ROV arm –  from land. Space Applications Services (SPACEAPPS) in Belgium are the lead partner developing a custom solution for this unique challenge: the DexROV exoskeleton.

The exoskeleton is a special sleeve and glove, which fit over a user or pilot’s hands and arm. It is attached to a mechanical base to support and counterbalance its own weight. In this way, it is weightless for the user. They will have free movement, despite the material weight of this clever input device.

The device is clever because it has force feedback motors built into the arms and hands. A user can feel what the DexROV arm pushes against under water for precise manipulation.

There is no current off-the-shelf model for this kind of controller. This is a custom-built design, entirely engineered by SPACEAPPS for the DexROV project.

Overcoming the challenge through modules

To face the challenge of designing, manufacturing and assembling the highly-sophisticated exoskeleton on time for DexROV, SPACEAPPS is using a module based approach to this unique deliverable.

A module is a ‘mechatronic unit’. It is a discrete element which fulfils a specific requirement of the overall system. A module might be used in more than one location within a system – for example an actuator (a small motor which controls a joint for force feedback) is used more than once – but it can be designed and developed as a module and replicated across the system.

The development of new technology follows set procedures or phases. During the first development phases the SPACEAPPS team learned about the system requirements and constraints. For the exoskeleton this included the kinematic structure, joint power, arm and hand adjustment range and more. SPACEAPPS defined more requirements for the usability of the exoskeleton – the aesthetics and the haptic performance. The goal was to make it effective and comfortable for the pilot.

During further phases of the project, the design was categorized into parts that could be modules – and therefore developed and tested independently. Modules are tested for their performance and their further applications throughout the whole design.

The modular approach cuts development time significantly. It also speeds up manufacturing and assembly of the final product. This all brings development costs down significantly too. This is no small detail given that a primary goal of the DexROV project is to create affordable technologies.

SPACEAPPS have been exploring 3D printing and other rapid prototyping techniques. This has made it possible to test and improve designs quickly.

Using both fast manufacturing techniques and the module based approach SPACEAPPS will finalise the development and integration of the DexROV exoskeleton interfaces elements by the end of 2017 – a few months ahead of the final DexROV integration and testing campaign.

For more information please refer to our contact page.