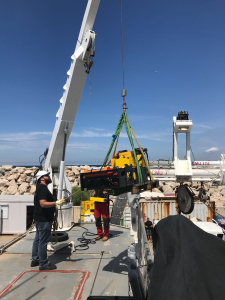 DexROV consortium members have been busy this week making preparations for the final sea-testing of the DexROV system. In March this year, the system was integrated during a dry test run that linked the Marseille Comex site and the onshore control centre in Zaventem, Brussels. 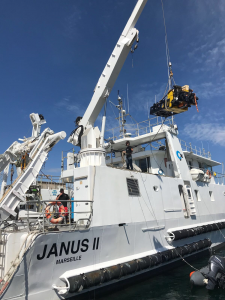 Today the DexROV was attached to the skid and tested using a crane attached to the Janus II. This part of extensive buoyancy tests to check DexROVs stability in the water. The vision systems have been calibrated, and arm control work will be carried out during the rest of today.

The test-bed, which is a three sided construct with mock-activities the DexROV system could face in a real operation, was loaded onto the Janus II this afternoon and will be carried out to sea to be placed at the first test location for next week’s activities.

There are plans for live streaming events next week on 21-22 June via social media (Facebook/Twitter) and on 26-27 June via the DexROV YouTube Channel. Subscribe to the newsletter and follow the social media channels for more information closer to the dates. There will be opportunities for live Q&A foreseen during these events.